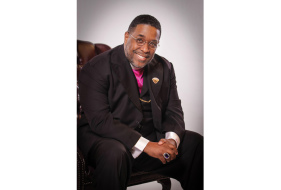 Born in Memphis on July 4, 1942, the Reverend Doctor Harold Middlebrook was a friend of the Reverend Doctor Martin Luther King Jr. and an active member of the civil rights movement. Middlebrook received his bachelor's degree from Atlanta's Morehouse College in 1963. He was ordained as a minister in 1966 and attended LeMoyne-Owen College and Memphis Theological Seminary in the 1970s. Middlebrook first became involved with the civil rights movement during his student years at Morehouse in the early 1960s. At Morehouse, he met Dr. King, then president of the Southern Christian Leadership Conference (SCLC). Middlebrook's association with the King family continued as Middlebrook served as the youth minister at Ebenezer Baptist Church in Atlanta, where both King and his father held pastorates. Middlebrook also became a member of the Student Nonviolent Coordinating Committee (SNCC) and participated in several sit-ins in Atlanta.

In 1965, Middlebrook directed the SCLC's Selma field office during the group's Alabama boycott. After the boycott failed, Dr. King chose Middlebrook to restore the morale of the African American community, which was openly hostile toward the SCLC's abandonment of the town. Soon thereafter, he organized a voter registration campaign that resulted in the registration of fifty-four new voters.

In 1968, as assistant pastor to Rev. Benjamin Hooks at Middle Baptist Church in Memphis, Middlebrook served on the strategy committee of the Community on the Move for Equality (COME), where he organized youth activities. In March of that year, the American Federation of State, County, and Municipal Employees organized a strike in Memphis after the city fired an African American sanitation worker because of his union activities. COME also supported the influential strike during which signs that read "I AM A MAN" became symbols of the civil rights movement.

As a member of COME's strategy committee, Middlebrook was instrumental in securing the appearance of Martin Luther King Jr. in support of the strike, which lasted sixty-five days. In mid-March, Dr. King visited Memphis to lead a mass march. King returned to Memphis on April 3 to offer further support to the strikers. The next day, King met with friends, including Harold Middlebrook, at the Lorraine Motel to plan the next mass march. As he leaned over the balcony railing to speak to people in the courtyard, a single gunshot tore through his neck and chin. Four days after Dr. King's assassination, the City of Memphis met most of the workers' demands.

Harold Middlebrook continued to pastor churches and serve the Baptist Conventions after King's assassination. He held pastorates in Greater Springfield Baptist Church in Bolivar, Tennessee, from 1970 to 1977, and Mount Calvary Baptist Church in Knoxville, Tennessee, beginning in 1977. He also served as director of Christian education for the West Tennessee Central Baptist Association, and as president of the Hardeman County Ministerial Association.

Middlebrook remained politically active throughout the 1970s and 1980s. He was president of the Bolivar Human Development Corporation, an advisor to the Hardeman County Bi-Racial Commission, co-coordinator of the Hardeman County Political Action Commission, and an advisory board member to the Tennessee Public Service Commission. In 1986, he founded the Dr. Martin Luther King Jr. Commemoration Commission of Greater Knoxville, which he chaired until 2000. Middlebrook has appeared in several films on the civil rights movement, including the 1993 documentary At the River I Stand, an adaptation of Joan Turner Beifuss's book by the same title, and the 1998 Oliver Stone documentary Assassinated: The Last Days of King and Kennedy.

Check out our Events Page for a listing of all of our upcoming events and activities and please join us for as many as your schedule will allow. We look forward to seeing you.

Join us for our Annual MLK Parade.  Register Online Today!